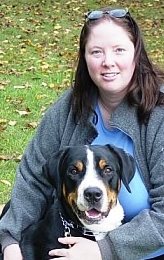 While I have had purebred dogs since I was a child (we had Samoyeds, Standard Poodles, and Australian Shepherds), I fell in love with Swissys in 2005 when I started work at the American Kennel Club and attended several dog shows.  I couldn't take my eyes off the Swissys, and I fell in love with their personalities.  After countless hours of research, I began my search for the right dog.  While I was interested in conformation showing, I was more focused on finding a dog that could do everything - drafting, weight pull, obedience, rally, tracking, pack hiking, etc.

I met the sire to my first Swissy at a dog show after he completed an agility run in Concord, North Carolina.  I had seen him win the breed that day in conformation, and I found out later that he had also competed in obedience just before going into the agility ring.  His name is Keygan, and since his owner wouldn't let me take him home with me, I kept in touch with her regarding future breedings to her lovely boy.  About six months later, Keygan was bred to the lovely Deme (owned by Judy Brown-Fletcher in Indianapolis), and I was chosen to receive my beautiful boy, Grainger.  About a year and a half later, I added Grainger's half-sister (who has the same dam, Deme) Oakley to our family.

Grainger was my work companion every day at the AKC, and he traveled with me all over the southeast and beyond for dog shows, draft trials, weight pulls, and vacations.  He was an amazing companion and a great working dog - very goofy and silly and loved to make me laugh, but when it was time to work - he was all ready!  See his page for his list of accomplishments and activities, and you'll see how he made Keygan proud!  He truly was an all purpose dog!  Unfortunately, he started having seizures shortly before his six birthday and after two years of a hard-fought battle with idiopathic epilepsy, I let him go in December 2014. My experience with Grainger and epilepsy has made me a better breeder, a better dog owner, and a better person. Losing him has been devestating, and I will continue to raise awareness for canine epilepsy - especially in Greater Swiss Mountain Dogs - and will continue to help others as they help their 4-legged friends deal with this awful disease.

Oakley is one of the sweetest female Swissys you'll ever meet - she's a big girl with an even bigger personality.  She is the definition of striking, vigilant, agile, and confident.  She lives with a wonderful family in Durham, NC and looks after their kids with the most gentle nature.  She has been shown on a limited basis just at local shows and she does drafting - both by pulling around her human kids in a wagon and helping with construction projects and yardwork.  She earned her CGC at six months old and has also participated in weight pull.  I cannot say enough good things about this girl, and she tends to be the subject of many good conversations whenever she's at the show ring or just out and about.  One look, and you'll fall in love.  She may even grin at you.

The breeding between Oakley and Keygan gave me six wonderful puppies in November 2010 - they are all named for Robert Redford movies, as he's one of my favorite actors.  All six puppies are healthy, sweet, confident, and smart like their parents.  River (named for the movie A River Runs Through It) has been an amazing addition to our family, and I also co-own her brother, Jasper.  At the age of two, Hobbs had already won a Best in Specialty and has continued to add to his many titles, including agility, drafting, pack hiking, weight pull, and obedience.  Five of the six puppies are AKC champions - all either owner-handled or handled by the sire owner.  The sixth puppy (Fireside's The Great Waldo Pepper) is disqualified from showing due to his color (he is a blue Swissy), but is exceling in obedience class and has made a lovely couple very happy by being their adorable pet.  What more could you ask for?!

Oakley's second litter is with the lovely Kramer, who passed away shortly after we confirmed Oakley was pregnant.  He was 10 years old.  They are all named for quotes or episodes/variations of episodes from the popular series, Seinfeld, to honor their sire Kramer.  Their incredibly sweet temperaments are making their owners very happy and putting smiles on the faces of everyone who meets one of these nine bundles of joy.  Mischke (Fireside's Real and Spectacular) is the addition to the Fireside Swissy family from that litter.  Don't get too close or you will get some serious kisses from this sweet girl.  Five of the nine puppies were evaluated as show quality, but only Mischke will be shown.

In 2013, Judy Brown-Fletcher and I decided to bring a puppy over from Europe.  From Czech Republic, Ferris has been everything we hoped for - tons of bone, depth of body, an amazing front, a thick soft coat, and the best temperament!  He has a great working drive and is already lighting the weight pull world on fire - earning all his Swissy titles in less than two months. He acheived his AKC championship shortly before turning two. If he gets his health clearances, we plan to breed him down the road.

In 2014, I added a puppy from Kristin Krumpe (Aegis GSMD in Connecticut) to the Fireside family. Easter is the daughter of a National Specialty winner (Bosco) and the granddaughter of the infamous Bowie. She is truly a joy in my house! Judy Brown Fletcher and I co-own her with Kristin and hope to breed her once she has her health clearances.

In December 2014, River had her first litter with Barrett. I can't wait to see how these puppies turn out! I will likely breed River again in the fall of 2015.

We live in Raleigh, NC, but I am originally from Charleston, SC.  While I now work in audit management, I am the former Director of Operations for non-profit AKC Companion Animal Recovery, where we worked to reunite pets with their owners through permanent identification (via microchips) and recovery services.  I am an active member of Southbound GSMD Club and serve as the Treasurer of the club.  I'm actively involved in Canine Epilepsy Awareness outreach, and I call some of the most responsible breeders my close friends. Swissys are not only a hobby for me, but a true passion of mine.

I hope to leave the breed better than I found it by being active with my dogs in showing and performance events and breeding for the qualities I find most important - temperament, health, and conforming to the AKC breed standard rather than public opinion or what happens to be winning at the time.

I believe in transparency, complete disclosure, and making breeding decisions that allow me to sleep well at night.  If you're chosen to get a dog from me, we will be friends for life.

Please feel free to contact me if you have any questions: